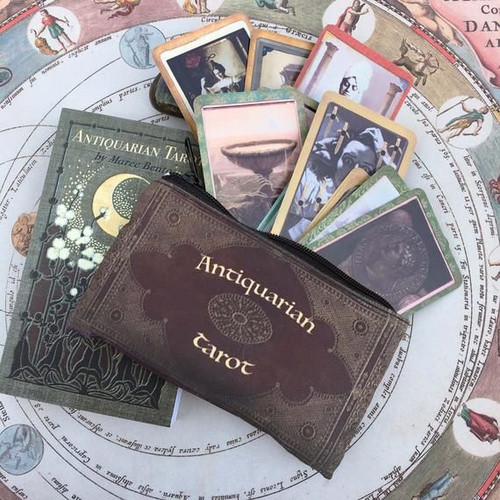 The Antiquarian Tarot is a Western Occult based deck with astrology and color system that allows for magical practice and deep intuitive readings. The detailed book gives the Initiate access to Tarot and the Adept reader detailed info about the artwork.

The Antiquarian Tarot is a working tarot deck for the modern Magician and mystical Witch.  A deck for old souls, past life connections and ancestral work due to the archivist nature of the artwork and study. It features handmade collages using 19th-century artwork & photography. This is the third edition of the deck, which was first released in 2014.

The cards are marked with corresponding astrology symbols. The Major Arcana cards also have the associated Hebrew letter. Both are based on the Golden Dawn designations.  This deck is largely based on the Rider-Waite-Smith (RWS) Tarot with occult influences from Paul Foster Case and a sprinkle of Crowley/Harris' Thoth. Anyone with knowledge of RWS can work with the Antiquarian Tarot.

If you're new to the tarot, many teachers r ecommend learning with the RWS, but the Antiquarian Tarot is an alternative starter deck to begin your tarot journey, especially if you appreciate an antique aesthetic.

80 card deck - Comes with a pouch and a full-size guidebook! ​

ABOUT THE MATCHING POUCH -
► Padded material with a red liner
► Hight quality YKK zipper
► Protects cards
► Easy to pack and travel with
► Slightly new bag design! Byline was removed (as seen in 1st and 2nd photos.)

The Major Arcana's wallpaper background is based on the colors that were assigned by Paul Foster Case. The Minor Arcana is also derived from his coloration symbolism and similar to the Albano-Waite:

This system of colors makes it easy to determine which elements are predominant in a reading or which are missing. This is especially helpful for visual people and may help facilitate intuition during a card reading.

Color is an ancient correspondence that was used in healing and magic along with the planets, the elements, herbs, spirits and numbers. So it is significant in this work.
​
MORE ABOUT THE BOOK - If you're looking for an introduction to the tarot, Maree wrote a detailed companion guidebook for her deck with instruction on how to start reading the cards. It's clear and concise, yet offers the new student ample information about each card.

The appendices has tables and references to make learning the tarot accessible. Including:
►Myers-Briggs Type Indicators connected to the the Court Cards
►Yes, No, Maybe Cards
►Tables with quick access to keywords
►List of tarot correspondences

If you are a tarot initiate, it acts as introductory primer. If you are an adept reader, the book offers detailed information about the cards explaining why certain symbols are used.

Much of modern occult wisdom was passed down through the Hermetic Order of the Golden Dawn, which scores of decks & books have drawn from. Maree Bento's knowledge pulls from these Western occult sources (found in the bibliography). In his early writings & studies, Paul Foster Case includes information about Hindu philosophy from the Western occult perspective. I think that is why I was so drawn to his work. Maree's guidebook is largely based on sacred tarot and occult mysticism, and includes information on the chakras. There is an appendix on the chakras with occult and Hindu correspondences. This is not meant to connect to the tarot designations, but to help one learn how to become more embodied in a magical practice, and guide one's intuition through meditation and reflection.

80 card deck - Comes with a pouch and a full-size guidebook! ​

Here is a link to the Authors' official webpage - https://www.divinemuses.net/