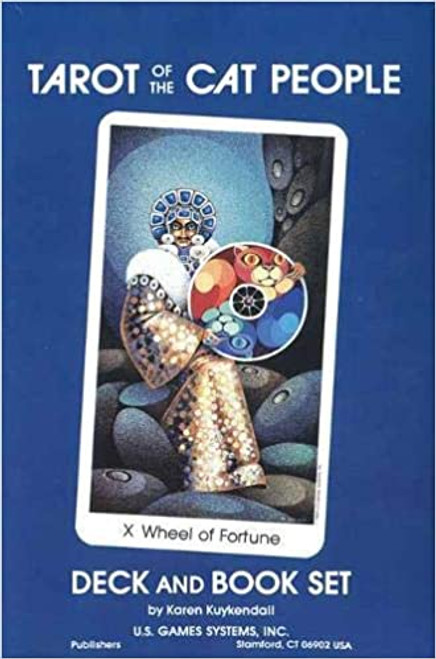 Out of the Vault

Science fiction and fantasy combine to create this stunning tarot deck and book set. Situated in a distant place known as the "Outer Regions," where people have a mystical rapport with nature.  The pack contains full-length portraits of mysterious people in ornate dress with elaborate jewelry and headdress.  The Major Arcana are represented by diamonds.  Each suit relates to a different kingdom: rubies are swords, emeralds are wands, topaz are cups and sapphires are pentalces. Cats appear everywhere, and their presence dominates daily life.

The Tarot of the Cat People book was written by a single explorer to the Outer Regions, a vast area very, very far away, very mysterious and quite alien.  Having begun what was to be a brief journey, she remained with the Cat People, studying their ways and adapting their costumes, taking part in their work, play and rituals.

Now, for the first time, Karen Kuykendall reveals the secrets of the Outer Regions in all their splendor.  A land that, because of its remoteness and its hostility to life as most people know it, has assumed legendary proportions, fueled by the tales of those daring explorers and intrepid traders who have returned with exotic artifacts, rare jewels and tales of their journeys.

Set includes a spread sheet for performing ancient ten-card readings of the past, present and future.