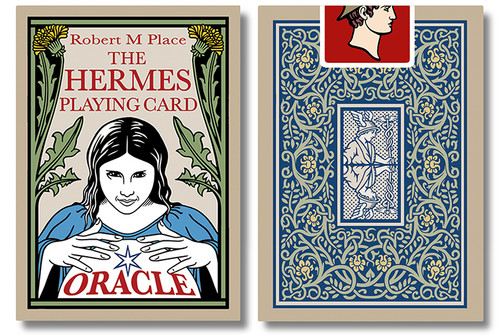 The Hermes Playing Card Oracle is an oracle deck designed by Robert M. Place. It is a standard game deck of 52 cards plus two jokers, but with the addition of symbolic images on each card, each providing a divinatory meaning. It can be used for card games, or laid out in the traditional pattern, known as the Grand Tableau, and used for divination.

The Hermes Playing Card Oracle is like a traditional oracle deck, but instead of each card being dominated by a symbolic image, with only a miniature of the associated playing card inserted somewhere on the card, each card is a standard playing card with the symbolic image inserted somewhere on the card. The symbolic images on each card are ones found in traditional oracle decks, and each has a specific meaning. The ones on the ace, 6, 7, 8, 9, 10, and the three royal cards in each suit are the same as in the Lenormand oracle. If the number 2, 3, 4, and 5 pips of each suit are removed, the deck can function as a standard Lenormand oracle deck. Every card has an additional symbolic image added, so that it functions as an oracle deck.

The deck can be used for any card game, but when it is used for divination, all of the cards are to be shuffled and laid out in the Grand Tableau pattern. When the deck is being used as a standard Lenormand, the Grand Tableau will consist of four rows of eight cards, laid out left to right from the top to the bottom row. Then the remaining four cards are to be laid out in a fifth row, centered on the bottom. When all 54 of the cards in the deck are used, which includes the two Jokers, the Grand Tableau with consist of six rows of nine cards, laid out left to right top row to bottom.

Click here to view the deck from the Authors' official webpage: https://robertmplacetarot.com/the-hermes-playing-card-oracle/

This is a 52-card playing card deck with rounded corners, + two additional jokers.  The cards measure 3.5″ by 2.5.”  A small book explaining the oracle is included in the box.