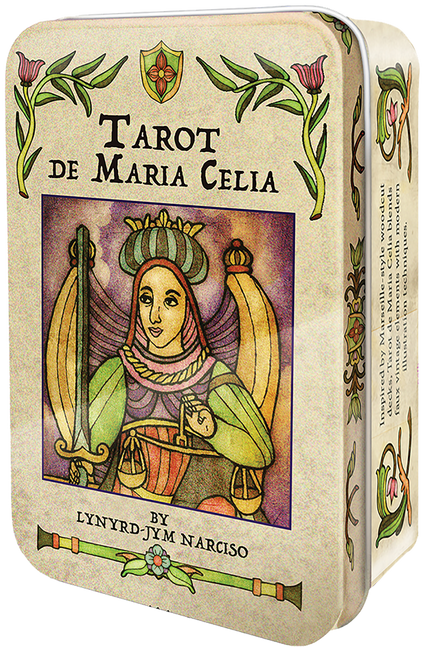 Popular tarot artist Lynyrd-Jym Narciso has focused his creative talents on modernizing Marseilles Tarot. Tarot de Maria Celia was inspired by several variants of the traditional Marseilles style yet brings its own uniquely charming features to this new deck. The card illustrations feature a fresh pastel color palette with “faux vintage” accents. In keeping with the European tradition, the card titles are presented in French.

On reading with Marseilles decks (from the Tarot de Maria Celia Booklet) -Most modern Tarot decks have fully illustrated Pips—that is, the cards of the Aces to the Tens each are depicted with pictorial scenes, more like the Court cards and the Trumps or the Major Arcana, and unlike those in normal playing cards. The Marseille cards are more like those of normal playing cards—with suit symbols carefully arranged and decorated with scroll and leaf elements, among others. This gives the students a twofold advantage, at least. First, it becomes easier for the student to meditate on the meaning of each of the Pips without being encumbered by fixed implications suggested by a scenic illustration. For example, what might the combination of the number eight and the suit of Swords mean? Secondly, the almost abstract quality of the decorative arrangement and elements of the Pips are good grounds for a more intuitive, if abstract, approach to reflecting on the cards’ meanings.

About the author -
Lynyrd-Jym Narciso is an artist, illustrator, and graphic designer based in the Philippines. He has been creating tarot decks for over a decade, among them, the Vanessa Tarot, published by U.S. Games Systems, Inc. He is known for his diverse artistic styles in the decks he has created. The main influence and inspiration for his art is the Taxonomy of Art itself—how styles and periods differ from one another, hence the varying looks of his decks. His illustrations have been published in books like Mga Tambay sa Tabi-Tabi: Creatures of Philippine Folklore, and 100 Questions Filipino Kids Ask Volume 2, among others. He enjoys doing paper and wood crafts, and thinking up things and merging ideas in a brainstorming process he calls“conceptual collaging”.

This pocket sized 80-card deck in a tin comes with a 56-page instruction booklet.

White Sage Tarot in a tin

Tarot of the Golden Wheel