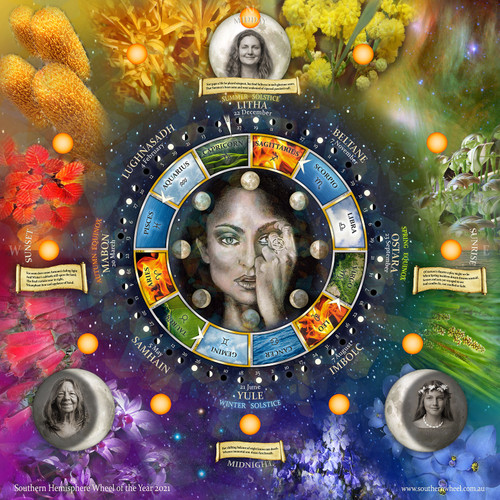 Beautifully captured on 170gsm satin paper, this 2021 calendar (600mm x 600mm) is the inaugural Wheel of the Year specifically designed for the southern hemisphere. Multiple layers are incorporated to represent the cycles of nature, humanity and the heavens. Calendars are shipped Australia wide in an Australia Post mailing tube.

The calendar, although created for the southern hemisphere, is primarily focused on Australia. This unique calendar tracks the solar year and lunar phases.  The dates for 2021 are correct for AEST and ACST and incorporate DST where applicable. For those living in Western Australia the summer solstice and Lughnasadh are on the day before the dates shown on the calendar. Likewise, the first quarter moons in March and August and the full Moon in October are also the day prior.

The High Priestess is the central figure of the calendar, and is the Major Arcana card II in most traditional tarot decks. She represents the hidden knowledge of the inner workings of the universe, the law of cyclic action and polarity. The phases of the Moon are shown, corresponding with the waxing and waning of the lunar month, the seasonal year and the trine aspect of the Triple Goddess - maiden, mother, and crone.

At an easy glance, you can see which tropical zodiac sign we are moving through and whether it is an earth, air, wind or fire element. Each of these are bordered either by gold signifying masculine orientation or silver for a feminine orientation. Astrological Wheel of the Year festival dates are shown along with the 2021 Moon phases.

The four main cardinal points refer to the daily and seasonal arc-like path the Sun appears to follow across the northern sky in the southern hemisphere. The images of the Sun are used to denote this movement, its arc moving high across the sky in summer and low throughout the colder months.

The outer rim displays Australian native flora along the spectrum of the artist’s colour wheel. Each month is represented by an Australian native that flowers in the month and colour that corresponds to the colour wheel. The warm and cool colours of the natives simulate the progressive subtle changes occurring throughout the year. The Southern Cross and the Pleiades are shown as pivotal seasonal markers on the calendar. The Southern Cross rising high in the evening of our southern sky in June, and the appearance of Orion and the Pleiades in the eastern sky in November.

Wheel of the Year Tarot

The Hippies in the City