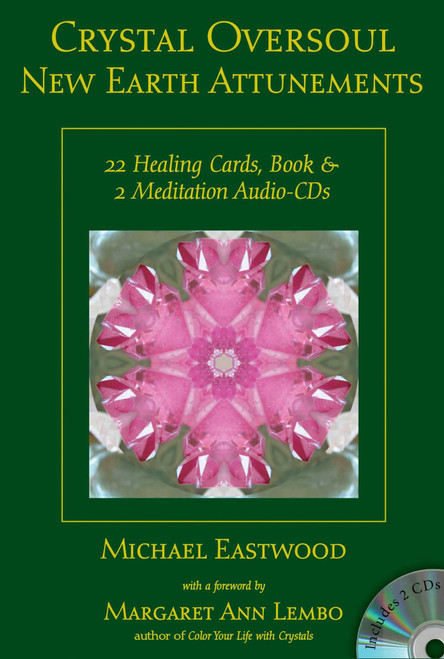 And so the journey continues... The Crystal Oversoul Attunements, published by Findhorn Press, explored 44 crystalline beings of consciousness through a series of mandalas, meditations and writings on their role in our unfolding journey.

This set is a continuation, an extension of that journey starting with card number 45 continuing to card 66, along with audio recordings that accompany each of the attunements. While Michael Eastwood was writing Crystal Oversoul Attunements, the Oversouls made it known that cards 1 to 44 would need to be released first, and that cards 45 to 66 should follow later. When he enquired as to why the cards 45 to 66 would need to wait, they answered the first 44 mandalas and writings explore humanity's evolutionary on-going journey from the end of one cycle into another entirely new paradigm.

The first 44 mandalas supported humanity's initiation known as the Great Turning of 2012 that would in itself birth the New Earth". Michael understands this to mean that, once humanity's initiation had been passed, the next set of Oversouls could be born. The new Oversouls could only make themselves visible through our understanding once the initiation had occurred and been integrated. The Oversouls further enhanced upon this Each of the attunements that make up the information in this set are in their own way here to help you as you navigate your way through the energies of the New Earth.

You will notice times when you life-force feels stuck, heavy or restricted - each of the Oversouls are here to support you through these times. For these unsettling or deeply uncomfortable feelings are signals that your energy has slipped back or has been pulled back by the energies of the Old Earth. The attunements are here to assist you getting yourself unstuck, releasing the old energy and getting into the correct dimensional reality."

Here they are, 22 new crystalline mandalas, writings and audio recordings that offer guidance as the New Earth reaches up, unfolds and welcomes us.

The Deck of Crystals

The Cosmic Deck of Initiation

Courage of the Soul