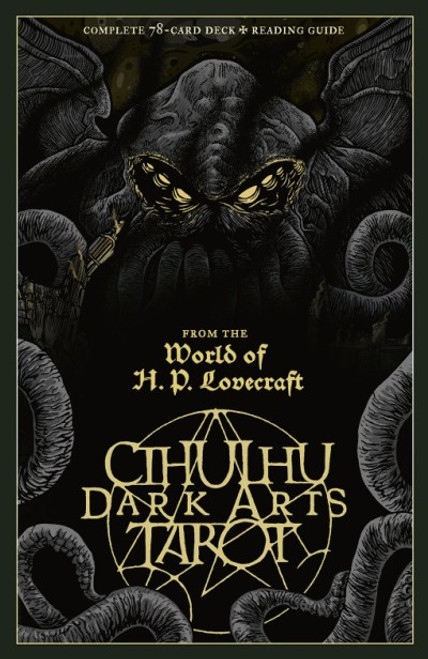 Divine the future with the ancient forgotten gods of Lovecraft!

Established by H.P. Lovecraft in the span of a few short stories, the Cthulhu mythos has been incorporated into popular culture and contemporary fantasy production, most recently in HBO's hit series Lovecraft Country. Made by connoisseurs and lovers of Lovecraft, Abrams is honored to present the first tarot deck solely dedicated to this special universe.

This complete tarot contains 78 illustrated cards, including 22 major and 56 minor arcana.  All decks will be packaged with a 32-page booklet that will help with the interpretation of each card.

The format chosen for this Cthulhu Mythos-inspired tarot is much larger than the usual divinatory tarot decks, including the Tarot of Marseille. This format is close to one of the oldest tarot decks, the "Visconti-Sforz" created by the artist Bonifacio Bembo between 1428 and 1447.

ABOUT THE AUTHOR - Maxime Le Dainis a highly regarded and world-renowned scholar of the Lovecraft mythos. Fortifem is design/illustration duo Adrian Havet and Jesse Daubertes, whose graphics have been employed by Rammstein, Slipknot, Trivium, HBO, and Cartier.Adrien Havet and Jesse Daubertes started their careers as graphic designers before combining forces—and a shared love of illustration—under the name Førtifem. Since 2012, they have developed a four-handed style that borrows from the strength of tattoo lines, as well as from the meticulousness of old engravings. Lovers of extreme music, they share their time between creating visuals for bands (Rammstein, Slipknot, Trivium, Emperor, Alcest, Carpenter Brut...) and for books and brands (HBO, Ubisoft, Cartier, Affligem, Le Monde...). Their personal drawings have been exhibited in Paris, Los Angeles, and Hong Kong. They are based in Paris and work from home.