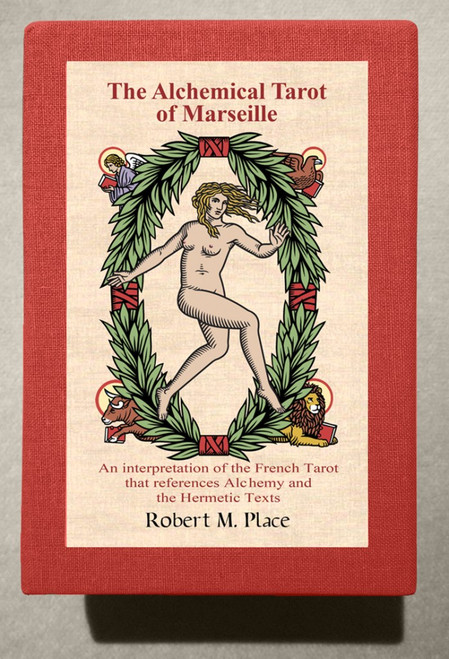 The Alchemical Tarot of Marseille is a 78 card deck that reinterprets the French Tarot in the style of the author, Robert M Place, with references to Alchemy and Hermeticism.  The pips display divinatory imagery.

The trumps in this deck are based directly on the traditional French cards with the French titles. The original cards are examples of naive folk art, and Robert has redrawn the figures in a more sophisticated style but one that that is still influenced by Renaissance prints. Each trump displays the same alchemical symbol that Robert used for the latest editions of The Alchemical Tarot. But the major innovation is that each trump displays a quote from the ancient Hermetica (as translated by Walter Scott in 1924), and that these quotes clarify the meaning of the imagery on the card in a way that demonstrates the underlining Hermetic philosophy.

Although the pip cards in the Tarot of Marseille do not contain much imagery other than the repetition of the suit symbol, this was not the norm for all early decks. From the beginning German decks of playing cards often included scenes of people and animals on the pips along with the suit symbols. Also Minchiate decks made use of this same approach. Robert has followed this example and included imagery on the trumps that is based on the divinatory meanings that he has worked out for The Alchemical Tarot.

Click here to view the deck from the Authors' official webpage: https://robertmplacetarot.com/the-alchemical-tarot-of-marseilles/