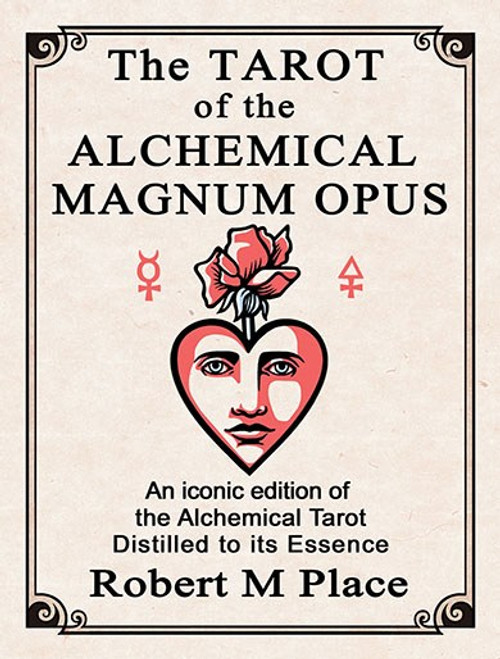 The Tarot of the Alchemical Magnum Opus began when Robert M. Place attempted to redesign The Alchemical Tarot in a simpler iconic form, something like the iconic images found in traditional oracle decks, such as the Lenormand oracle. Robert wanted to create simplified images that captured the essence of what each card was saying. While the original Alchemical Tarot images are strongly based on actual 17th century alchemical engravings, for this version he created his own images expressing each of the alchemical processes in my own way.

Robert also waned to make a deck that could have been printed using wood blocks, like Renaissance cards. He used only four colors: black, white, blue, and red, each representing a separate wood block printed on a parchment background. (& found it necessary for the maintenance of alchemical symbolism to add yellow on three cards.) Because the colors each represent an area printed from a carved block, the colors are hard-edged without gradation. The black lines define the outlines and darkest areas and the blue and red areas act as medium tones that define the forms and textures. This simplified code for interpreting forms, like alchemy itself, can be traced back to ancient Greece. It is a cornerstone of Western art. What he also realized was that through this process Robert was distilling the symbols, paring them down to their essence. It was a work of alchemical art.

Click here to view the deck from the Authors' official webpage:https://robertmplacetarot.com/the-tarot-of-the-alchemical-magnum-opus/