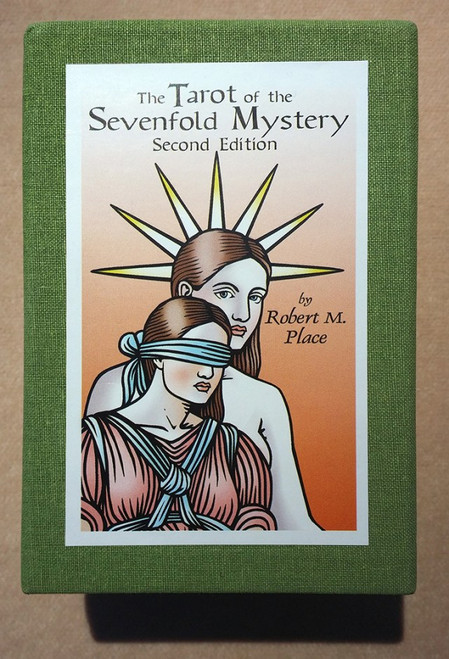 The Tarot of the Sevenfold Mystery expresses the transcendental philosophy that is linked to the origin of the Tarot. It illustrates the ancient Western systems of the three soul levels and seven soul centers that function as steps on a mystical ladder of ascent to higher consciousness. It can be read on many levels, from the mundane to the spiritual, it is a source of inner wisdom and advise, and can uncover the longings of the soul.

Burne-Jones based his tall female “stunners” and melancholy heroes on the paintings of Botticelli (1445-1510) and Michelangelo (1475-1564), two artists whose works are considered primary examples of Renaissance Neoplatonic mysticism.  Burne-Jones was inspired by the beauty and symbolism of the fifteenth century (the century in which the Tarot was created) it is not surprising that he painted many of the same themes that we find in the Tarot, such as Temperance, Lovers, and the Wheel of Fortune. It seemed to Robert that he was creating a Tarot but he never finished it. Robert started this deck with a desire to finish Burne-Jones’s Tarot for him. He wanted to see what a deck would look like if it were done in his style and with his sense of sensuality and symbolism. Robert also realized that it would express the Neoplatonic ideal that he believed was expressed in the Tarot from its origin. By proceeding with this intent, this deck became a bridge between the art and occult symbolism of the nineteenth century and the iconography and mystical philosophy of the fifteenth century. It shows that they are both rooted in the perennial mystery that is like a golden thread running through Western History.

Neoplatonic Symbolism -  In Neoplatonic mysticism, numbers are used as symbols and the numbers three and seven are of primary importance. As testament to its Neoplatonic origin, the Tarot has a fifth suit composed of an unnumbered Fool and three times seven trumps. The sixth century BC philosopher, Pythagoras, was said to have theorized that there are three kinds of people, each characterized by their level of spiritual development: those who love profit, those who love fame, and those who love wisdom. Plato continued this idea by stating that each person has three souls: the Sole of Appetite, the Soul of Will, and the Soul of Reason, which he symbolized as a chariot with two winged horses and a driver.

The  minor suits in The Tarot of the Sevenfold Mystery related to the four elements and the pips and courts are similar in meaning to the same cards in The Alchemical Tarot.

The Design for the Back of the Cards - The Staff of Serapis - Serapis was the principle god of the mystery religion that dominated Hellenistic Egypt. He was a combination of the Egyptian Osiris and the Apis bull. The Hellenistic Egyptians equated him with the Greek Hades and they provided Serapis with a three-headed dog like Cerberus. The three heads of the Egyptian hound were transformed into the head of a wolf, a lion, and a dog, representing the past, present, and future.

This new second edition has:

The companion book for this deck is: The Tarot, Magic, Alchemy, Hermeticism, and Neoplatonism, Second Edition - Also Available from Tarotopia

Click here to view the deck from the Authors' official webpage: https://robertmplacetarot.com/the-tarot-of-the-sevenfold-mystery/