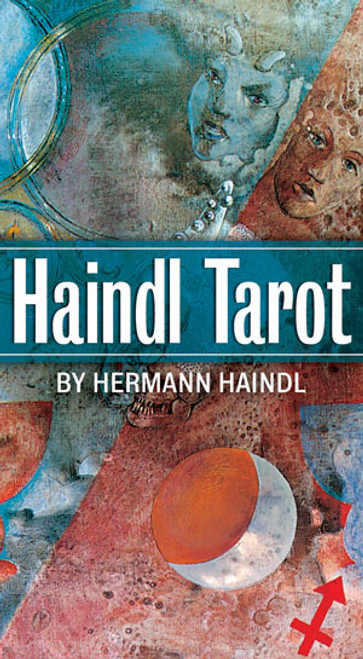 Haindl draws upon his knowledge of ancient cultures and his experiences with Native American life to create a unique deck that is a colorful and penetrating study of nature and spirituality. The Haindl Tarot deck relates the spiritual traditions of many cultures to human experiences and to the sacred wonder of our Earth.

The captivating artwork of Haindl Tarot is non-traditional, yet the deck does follow the structure and meanings of the Rider-Waite deck for the most part, with some references to the Thoth Tarot. Each Major Arcana card shows kabbalistic, runic, and astrological associations. In the Minor Arcana each court card is represented by a god or goddess. The four suits are Wands -- Hindu; Cups -- Celtic and Norse; Swords -- Ancient Egyptian; and Stones -- Native American.

The Haindl Tarot draws people in by the rare quality of its art. A painter who devoted his life to his work, Hermann Haindl brought to his pictures a skill and sophistication rare in modern Tarot decks. Drawn in by the unusual beauty of the cards, people who became familiar with the cards and learned how to use them discovered something more profound: a way of living dedicated to the sacred wonder of the Earth.

The Haindl Tarot draws on the spiritual traditions of many cultures. By itself, this in not unique, as quite a few contemporary decks feature art from different cultures and mythologies. The Haindl Tarot, however, connects these traditions to real experience.

These seventy-eight paintings reflect Haindl’s devotion to nature, his recognition of the feminine, his travels, his encounters with holy teachers and spirits, his respect for all peoples, his political belief in responsibility for the past and future, and the crises that have shaped his understanding. Drawn to the cards by their unique art, many thousands of people have found their lives changed, sometimes quite dramatically.

-- From the Introduction to Haindl Tarot; A Reader’s Handbook by Rachel Pollack