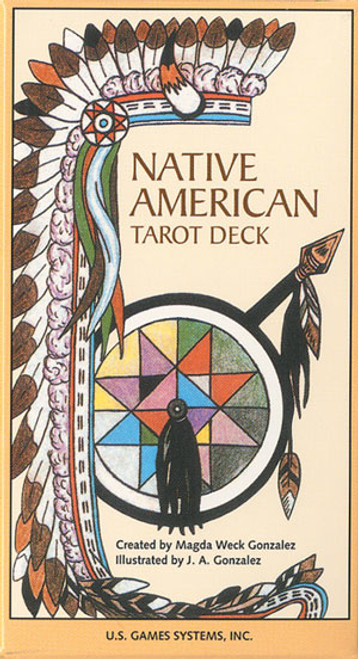 The Native American Tarot is drawn from the four corners of North America: Eastern Nations, Plains Nations, Southwest Nations and Northwest Nations. The cards are informed by a variety of Native American tribes including Apache, Arapaho, Cherokee, Cheyenne, Chippewa, Comanche, Hopi, Huron, Inuit, Iroquois, Kiowa, Navaho, Papago, Pima, Pueblo, Shawnee, Sioux, and Yaqui. This deck is not limited to the standard interpretations of traditional illustrations, but reflects the spirit and meaning of the Native American Way.

Inspired by the fusion of European and Native American ideals, the card titles and illustrations are modified in both obvious and subtle ways. Comprised of 78 cards, divided into 22 Major Arcana and 56 Minor Arcana. The four suits of the Minor Arcana are Blades, Pipes, Vessels, and Shields. What are traditionally the court cards are represented in Native American Tarot with tribal figures that project powers of personality.

The four basic power essences are:

The 108-page booklet includes instructions for the Medicine Wheel spread, the Native Cross spread, the Shining Star Spread, and others.