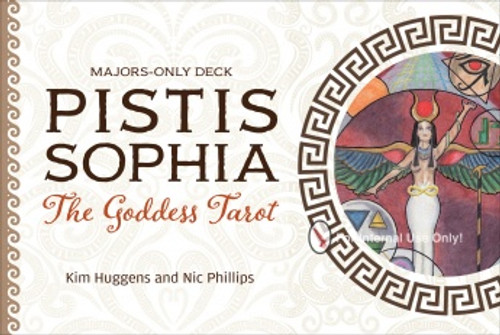 Follow the path of wisdom with Pistis Sophia: The Goddess Tarot, a fully illustrated Majors-only Tarot deck that explores traditional archetypes through the landscape of the mythological female. Uniting archeology, anthropology, and history with the wisdom of the Tarot, it depicts goddesses, holy women, and heroines, exploring the card meanings through their stories, writings, worship, and imagery from a wide variety of cultures and time periods.

A guidebook teaching use and interpretation of the cards offers an accessible but in-depth analysis of the figures and myths depicted.  (This is a sister deck to Sol Invictus: The God Tarot.)

About the Author/s - Kim Huggens - Kim’s first tarot deck,Sol Invictus: The God Tarotwas published by Schiffer in 2007. Her first book was released by Llewellyn in 2010—Tarot 101: Mastering the Art of Reading the Cards. Later, she worked with artist Erik C. Dunne to create the best-sellingTarot Illuminati (Lo Scarabeo, 2013), and together they worked on a sister deck, Tarot Apokalypsis (Lo Scarabeo, 2016). Kim’s passion for Tarot is matched by her passion for mythology, and she has edited three anthologies exploring themes in mythology:From a Drop of Water (Avalonia, 2009), Vs. (Avalonia, 2011) and Memento Mori (Avalonia, 2012). She completed postgraduate studies in ancient history, focusing on the magic and religion of the classical and Late Antique world. She lives in Wales, UK, with her partner and black cat.

Nic Phillips - Following the publication of Sol Invictus: The God Tarot, Nic almost immediately began work on this deck with Kim, whilst also expanding his artwork into different media on a larger scale. With a keen interest in the folklore of the British Isles, he wrote and illustrated Celtic Saints of Western Britain (Avalonia, 2015) and moved to live and work in Glastonbury, UK, surrounded by its Arthurian history and esoteric mystery, where he produces spiritual and Goddess-themed artwork. Nic’s other research interests include world mythology and the nature of pilgrimage, and he is also currently working on a book about the Black Madonna.

For intermediate and advanced users.

Tarot of the Kingdoms